The Moose Jaw Ford Curling Centre will once again play host to a Saskatchewan Curling Tour, presented by Visit Moose Jaw, with this tour welcoming 15 Men's Teams to Moose Jaw! The first draw will take place Friday, November 19th at 5:30pm and run all weekend with the finals at 4:30pm Sunday.

This year marks the Tenth year that the tour has made a stop here at the Moose Jaw Ford Curling Centre at Mosaic Place.  Once again, many familiar names, including former provincial curling champions from around the Province will be competing for the prize purse.

Find more information on this and other stops along the tour here.

Book your Holiday Party at Mosaic Place and choose from two fantastic options!

The Moose Jaw Ford Curling Centre wants to ensure curlers are safe throughout the entire curling season. We are following the Government of Saskatchewan’s Public Health Orders and have reviewed the Curl Canada and CurlSask Return to Play Guidelines to find a balance for our youth recreational leagues. As part of our return to play guidelines we will be asking everyone 18 years of age and over to be double vaccinated or provide proof of a negative COVID-19 test administered within the past 72 hours.

*This will apply to all participants in Moose Jaw Ford Curling Centre leagues except for Sunday FunCurl and Youth Leagues.

During all curling leagues, bonspiels and special events, everyone 12 years of age and older must provide proof of full vaccination against Covid-19 and or has received a negative COVID -19 test administered with the past 72 hours to access the lounge.

All events hosted at the Moose Jaw Ford Curling Centre, including Curl Canada/Curl Sask sanctioned events, club bonspiels and other curling special events will require everyone over the age of 12 to be fully vaccinated.

The following documentation will be accepted as proof of vaccination:
• Wallet cards received at time of immunization
• A printed copy or screenshot saved to your device of your MySaskHealthRecord vaccine certificate (with or without a QR code)
• An earlier version of your MSHR COVID-19 vaccine certificate
• A COVID-19 vaccine printout from Saskatchewan Health Authority Public Health
• A QR code/MySaskHealthRecord vaccine certificate uploaded to SK Vax Wallet
• Documentation demonstrating proof of a negative COVID-19 PCR or rapid antigen test provided by a certified healthcare provider, including private providers of COVID-19 tests. A self-administered take-home rapid antigen test will not be accepted.
All of these will need to be verified with ID (photo, health or birth certificates).

Individuals who do not have proof of vaccination, which includes partially vaccinated individuals; and, individuals who have medical or religious exemptions that prohibit them from receiving a COVID-19 vaccine will be required to provide proof of a negative Covid-19 test within the previous 72 hours.
Only COVID-19 PCR or rapid antigen test results provided by certified healthcare providers, including private providers will be accepted. A self-administered take-home rapid antigen test will not be accepted as valid proof of negative COVID-19 test results. The cost for all proof of negative test results will be the responsibility of the individual.

Your safety and well-being are a top priority! Mosaic Place has obtained it’s Global Biorisk Advisory Council® (GBAC) STAR™ accreditation, the gold standard for prepared facilities. Under the guidance of GBAC, a Division of ISSA, the worldwide cleaning industry association, Mosaic Place has implemented the most stringent protocols for cleaning, disinfection, and infectious disease prevention. More information on our GBAC Star accreditation can be on our website. Additionally, sanitization and added disinfectant runs have been put in place to keep our guests healthy and curling.

Face coverings are not required for the following Individuals:

Face coverings are not required in the following circumstances:

After careful thought, consultation with stakeholders and consideration of the Government of Saskatchewan’s COVID-19 restrictions remaining in effect until January 29th (at minimum), it is with mixed emotions that the Moose Jaw Ford Curling Centre has made the difficult decision to cancel the remainder of the 2020-2021 curling season.

Moose Jaw Ford Curling Centre would like to take this opportunity to thank all curlers, coaches and fans for your commitment and patience while we’ve worked through the challenges of this 2020-2021 season. We thank you all for adhering to the new guidelines put in place for the safety of both the curlers and staff throughout the first half of the curling season.

For any curler that paid for the full league fees for the 2020-2021 curling season, you will receive a credit on your Curling I/O account for the balance of fees for January 2021-March 2021 which will be applied to your curling fees for the 2021-2022 season.

Moose Jaw Ford Curling Centre looks forward to welcoming everyone back in October 2021 as we celebrate 10 years of our club at Mosaic Place!

Rhonda Wenarchuk
This email address is being protected from spambots. You need JavaScript enabled to view it.
306-630-8825

The Canadian Wheelchair Curling Championship has found its home for the next two seasons, it was announced today by Curling Canada.

The 2022 and 2023 Canadian Wheelchair Curling Championships will be played at the Ford Moose Jaw Curling Centre in Moose Jaw, Sask.

The venue is located inside Moose Jaw’s downtown Mosaic Place, the venue of the 2020 Scotties Tournament of Hearts. The conjoined Ford Moose Jaw Curling Centre was used as the Heart Stop Lounge during the event.

“Moose Jaw is coming off of hosting a successful Scotties Tournament of Hearts and I’m thrilled to see another Canadian curling championship return to my home province of Saskatchewan,” said Mitch Minken, Chair of Curling Canada’s Board of Directors. “This host committee is determined to provide a first-class experience for our country’s wheelchair curlers over the next two years and they have our full support.”

It will be the first time Moose Jaw hosts the Canadian Wheelchair Curling Championship and it’s been hosted once in Saskatchewan prior – in 2016 at Regina. The 2022 championship is scheduled for Feb. 21-26, while the 2023 event will take place Feb. 20-25. 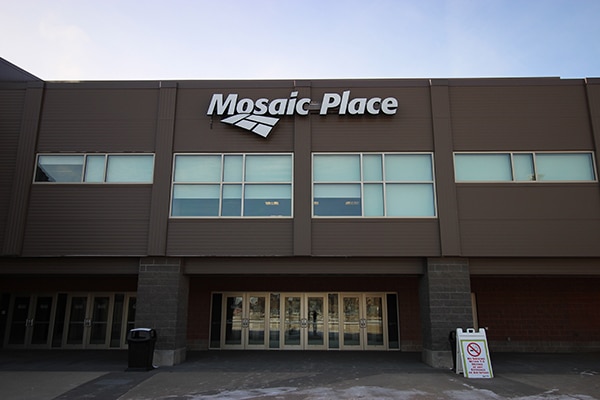 “We are looking forward to hosting the 2022 and the 2023 Canadian Wheelchair Curling Championships with great anticipation,” said Moose Gibson, host committee chair of the events. “It is our goal to provide an outstanding experience both in the curling club and in the city. Moose Jaw has a strong history of putting on successful Curling Canada events and that experience will ensure that this event is no different.”

“The City of Moose Jaw welcomes the opportunity to host such a prestigious event,” said Mayor Fraser Tolmie. “The people of Moose Jaw are known for their hospitality, strong community volunteer support and access in hosting events.”

The 2022 event will be the 17th edition of the Canadian Wheelchair Curling Championship, which made its debut in 2004. The event was cancelled in 2020 due to the COVID-19 pandemic.

“We are very excited to welcome the Canadian Wheelchair Curling Championship back to Saskatchewan in 2022 and 2023. The City of Moose Jaw and local curling community has proven their ability to host first class events with the successful hosting of the 2015 and 2020 Scotties Tournament of Hearts and 2012 Canada Cup of Curling,” said Ashley Howard, Executive Director of CURLSASK. “This championship will mark the second and third time respectively that the Canadian Wheelchair Curling Championship has been hosted in Saskatchewan and we are confident in the ability of host chairman Moose Gibson and his team; we know it will be a wonderful showcase for Canada’s best wheelchair curling teams.”

The most recent event was won by Alberta’s Jack Smart in Boucherville, Que., in 2019. The gold-medal victory was Alberta’s first at the Canadian Wheelchair Curling Championship with Smart defeating Manitoba’s Dennis Thiessen in the final. Thiessen has previously skipped Manitoba to gold in 2014 and 2017.

Representatives from all 14 Member Associations are eligible to compete in Moose Jaw. The teams are separated into two pools of seven and compete in a six-game round robin. The top team in each pool advances directly to the semifinals and the remaining teams crossover to play a qualification game. Winners of the semifinals games advance to the gold-medal game and the losers compete in the bronze-medal game.